The ultra-right anti-immigrant parties are making sweeping gains electorally and politically in Europe since the economic crisis erupted in 2008. While focusing on the threat of Islamic extremism, real or imagined, we have ignored (in some cases encouraged) the growth of a greater and more urgent threat – the ultra-right parties that are targeting working people, ethnic minorities and the most vulnerable sectors of the crisis-ridden capitalist system.

Since the onset of the 2008 breakdown of the capitalist economic system, the political parties and organisations of the Left have been gaining ground. The growth of workers organisations, socialist parties and organised labour in Greece, Spain, Italy, and other European countries points to an encouraging resurgence of resistance to attacks by the capitalist financial elite. More people are recognising that austerity measures means that the burden of economic recovery will be paid by the people suffering from the economic malaise, and the people that caused the crisis are avoiding taking any responsibility.

However, while the Left has reaped rewards from the breakdown of the capitalist order, let us not be complacent – the economic crisis has also seen a surge of support for the ultra-right. The anti-immigrant parties, marketing themselves as ‘Euro-sceptics’, have exploited the grievances of workers and dispossessed people in Europe to make sweeping electoral and political gains.

As the mainstream bourgeois parties roll back the social and economic gains of the post-World War Two European system, privatising health care, education, and removing social benefits, more people are being pushed down into poverty and living in precarious financial circumstances. The ultra-right parties have gained significant traction in terms of their electoral appeal, and have mobilised thousands of members and supporters to influence the political process in various European countries.

To be sure, the ultra-right parties have been organising and active since the dissolution of the Eastern Bloc in 1990-91. They have appealed to the nationalist sectors of the population, railing against the injustices (real or perceived) of a growing European Union. Their populist opposition was always one of anti-immigration, in particular anti-Arab and anti-Islamic racism. Islamophobia is a vote-winner, and the populist appleal against the new and latest ‘outsiders’ has proven to be electorally beneficial. The French National Front has been the best exponent of this strategy.

The ultra-right parties in Eastern Europe have traditionally been anti-Semitic, drawing on the political experiences of these countries during the 1930s and 1940s when they were capitalist nation states. Anti-Semitic politics was a constant feature of the Eastern Europe nations in the inter-war years. With the reintroduction of capitalist in the early 1990s, openly fascistic and ultra-right parties started making a comeback. Cultural nationalism, and hostility to immigration, found an organised political expression. This political current has reached levels of political power in at least one Eastern European capital, Kiev, the Ukraine.

For the first time since 1945, political parties that trace their political lineage to wartime Nazi collaborators have taken key positions of power in a European country. The Kiev regime, installed in early 2014 after a popular uprising against the previous oligarchic government of Viktor Yanukovych, openly lionises those Ukrainians who fought alongside the Nazi German forces during World War Two. These ultra-nationalist and anti-Semitic Ukrainians killed Jews, Poles and anti-fascist Ukrainians in their roles as auxiliaries of the German army. The Svoboda party, which forms part of the Ukrainian Right Sector, routinely denounces the presence of Jews, Russians and other minorities in the Ukrainian polity. Stepan Bandera, the wartime leader of the Ukrainian nationalist organisation, led the pogroms against Jews, Russians, Poles and ethnically cleansed the areas he controlled as part of an effort to create a racially pure Ukrainian state. Bandera is currently hailed as a hero by the new far right Kiev government. There are positive references to the ‘Galician SS’, Hitler’s term for those Ukrainian collaborators who carried out his project of ethnic genocide during the war.

While there are no tears for the ousting of the oligarchic Yanukovych regime, who had integrated Ukraine into the capitalist system and traded with the EU and Russia, there are no celebrations for the mass fascistic parties that have taken power in the wake of the 2013-2014 putsch. The Ukraine of Yanukovych walked a fine line between the competing, balancing interests of the European Union and Russia, placating both sides and maintaining the Ukraine as a ‘buffer’. However, with the help of the EU and the United States, the most pro-Rightist forces, openly spouting their brand of anti-Semitism and white supremacism, organised the most politically active and coordinated elements of the anti-Yanukovych uprising. The neo-fascistic groups, happily displaying their white-power and swastika-resembling symbols, became the face of the pro-EU Maidan uprising. The ultra-right groups made no secret of their coordinating role in confronting the previous regime, and organising the uprising politically.

We also cannot ignore the role of the United States and European Union in financing and politically encouraging these ultra-right anti-Semitic parties, ensuring that the Right Sector were at the political heart of the Maidan protests. Imperialist-supported regime change is always a strong element in driving the political directions of mass protests in Europe. It is no secret that major US politicians, like US Assistant Secretary of State Victoria Nuland, openly supported the Ukrainian ultra-right parties that formed the core of the anti-Yanukoych protests. This corresponds to the general imperialist strategy of incorporating the former Soviet republics into NATO and the western economic orbit. Politically encouraging the ultra-right as a battering ram in Eastern Europe is an integral step in absorbing these states into the imperialist economic and military network.

Not every single person that participated in the Maidan uprising was a card-carrying member of a neo-fascist party, far from it. But when the most politically organised forces are espousing a white-supremacist ideology, ranting against the influence of Russians, Jews, and ethnic minorities, advocating a Hitlerian view of history, and are friendly to the pro-business agenda of the imperialist states, it is all but inevitable that the Kiev regime will gravitate into the orbit of the EU and NATO, a regime in charge of a state right on Russia’s doorstep.

The Yanukovych regime was no friend of the working class, that is certain. That regime was responsible for corruption, maintaining the rule of the oligarchs that have left the Ukraine an economic mess. Yanukovych was part of the oligarchic capitalism that has enriched a tiny handful of billionaires, privatising state assets, and leaving the majority of the population struggling to survive in the post-Soviet capitalist economic order. However, this does not blind us to the fact that the beneficiaries of the Maidan protests have been the ultra-right, mass fascistic parties.

As Seumas Milne pointed out in his insightful article; “So in the week that the liberation of Auschwitz by the Red Army was commemorated as Holocaust Memorial Day, supporters of those who helped carry out the genocide are hailed by western politicians on the streets of Ukraine. “ Read the entire essay by Milne at The Guardian web site here.

It is not just in the Ukraine that the ultra-right is attaining political success. Hungary has witnessed the rise of its own homegrown variety of fascism, the Jobbik party, with its electoral wing and its paramilitary thuggish branch. Jobbik campaigns on an anti-immigrant, xenophobic platform, and not only wins seats in parliament, but also intimidates its opponents on the streets. Jobbik has contributed to the emergence of anti-Soviet and anti-Russian cultural nationalism in Hungary since the withdrawal of Russian troops in 1989. Winning further success in the wake of the growing capitalist economic crisis, Jobbik has exacerbated anti-Roma sentiments and blamed this particular ethnic group, along with the Jews, for Hungary’s economic doldrums. Any lingering doubts about the racist underpinnings of Jobbik would have been resolved by viewing the leaflets handed out by their supporters. Their campaign literature contained an image from the Easy Rider film accompanied by the slogan ‘Jews are the problem – time to step on the gas!’

Venturing further afield from Eastern Europe, we can see the emergence of a more united, coordinated ultra-right formation across the European continent – a ‘Brown International’ if you will. (Hat tip to Left Flank). In an article by the Greek socialist Thanasis Kampagiannis, the growth and cooperation of various ultra-right parties is examined. Written in January 2014, the author warned of a major electoral breakthrough by far right parties in the general European elections in May – he was proven correct, with the French National Front, exploiting anger about the mounting social costs of austerity, emerging as the big electoral winner in French elections.

After a public relations facelift, the extreme right-wing parties of the National Front led by Marianne Le Pen, and the Dutch Freedom Party headed by the execrable Geert Wilders, announced an alliance of sorts back in November 2013. Couched in the terms of Euro-scepticism, the ultra-right is using the breakdown of the capitalist order, and consequent surge in unemployment, to make significant political gains in the traditionally stable capitalist economies of Western Europe. While they distance themselves from the more openly pro-Nazi parties like the Greek Golden Dawn, they using the same anti-immigrant and populist platform to espouse their views, and they have received a friendly hearing from some mainstream bourgeois politicians as well. The ultra-right of Western Europe, including the Austrian Freedom Party, UKIP in Britain, the Italian Northern League and the Swedish far-right Democrats, have all toned down their more brazen fascistic thuggish image and cultivated an air of political sophistication. However, beneath the veneer of respectability is the strong lurch to the right.

Europe is increasingly resembling the economically and politically chaotic situation that obtained in the 1930s. We are not there yet, however, the coordination of ultra-right parties does present an urgent menace that must be confronted. The article by Kampagiannis above explains that;

If racism was the ticket for the fascist parties to pass from the margins to the central political scene, Islamophobia ensured that their seat would be Business Class. Islamophobia offered the adhesive tissue for the alliance of Le Pen and Wilders.

Open racism ensured that the ultra-right would get a hearing in the parliaments of Europe – Islamophobia guaranteed that they would receive a respectable hearing in the corporate boardrooms and political headquarters of European capital. The outsider enemy was necessary to unite all these disparate formations into a more cohesive force, as encapsulated in the following image from Left Flank; 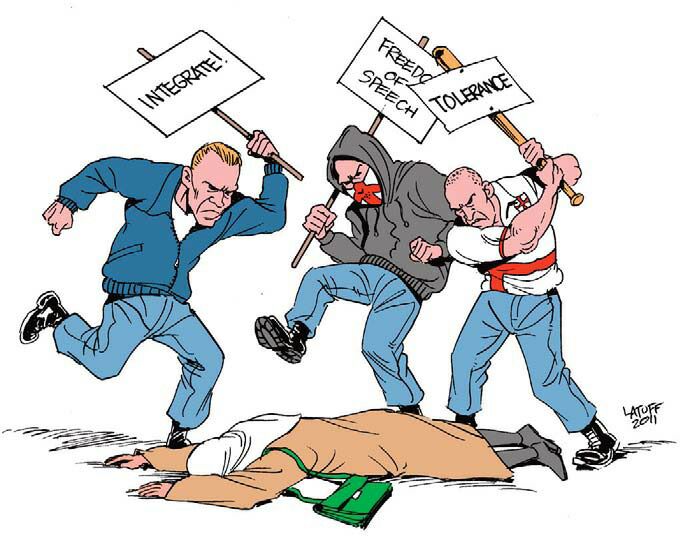 Hostility to Islamic migration has been the key electoral strategy that ultra-right needed to gain mainstream respectability, portraying themselves as the defenders of Western cultural nationalism from the intrusions of backward outsiders.

The legitimacy of the mass ultra-right parties must be confronted by an organised, multiethnic Left that opposes all forms of racism and xenophobia. It is not migrants or refugees that are responsible for the worst economic crisis in Europe since the end of World War Two. The capitalist class with its programme of neoliberalism and endless war is directly responsible for the privations of the workers and unemployed in Europe. As Jeremy Corbyn, a socialist politician from England explained, ultra-right populism ignores the true causes of pauperisation and war; blaming one minority group after another is a barren and futile exercise. The free-market fundamentalism that drives our economic programme is to blame. We have taken up the warnings about Islamic extremism (real or imagined) in the aftermath of September 11 and the bogus ‘war on terror’, but have ignored the rise of the greater and very real danger of an organised and politically active ultra-right.